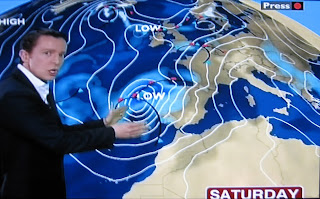 Close all your doors and windows, don’t venture outside, leave the car at home, lock up your daughters…… well, maybe not the last one. These are some of the warnings that we have received over the last 12 hours, as a rather powerful storm heads towards the northwest of Spain and the Bay of Biscay.

Barely a week ago Funchal, the capital city of Madeira, was ravaged by storms, killing just over 40 people (and possibly more as they still search for the missing). In this case the heavy rain was compounded by mud slides and flash floods that destroyed houses and swept victims away, leaving the area without water, power and communication.

A second weather system, carried by the same jet-stream, is following a similar path across the north Atlantic, and is now gaining strength as it heads towards mainland Portugal and the northwest of Spain. Forecasters are predicting winds of up to 150/160 kph (100 mph), which is obviously a cause for concern. The storm is also rain-wrapped, so there is also a strong possibility of flooding in low lying areas.

Over the last few months we have already experienced more than our average total rainfall for the year, and this was before last Wednesday when we had heavy, torrential rain pretty much non-stop for the whole day and into the night.

Now let’s see what mother nature holds in store for the next 12 hours!