The dictionary definition of legacy is more often interpreted simply as a gift or an inheritance of wealth and/or property. This explanation is however, the more materialistic view, as in reality it can be defined in any number of ways.

As far as it is understood within the Martin family, it has a much deeper and more poignant meaning. In the case of the Castro Martin business we are talking about the legacy of one man, Domingo Martin – a man with a keen eye for business and opportunity, but more significantly, a man with a clear vision of the future. Bodegas Castro Martin now stands as a monument to his vision, foresight and determination in so many different ways. 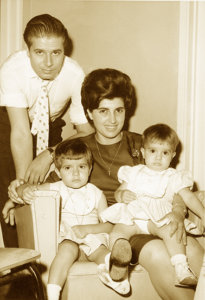 The Martin-Serantes family had been making wine for generations, in the same way as many other people in the local villages of Galicia. It was all very much a ‘cottage’ industry, with much wine being produced for home consumption, with perhaps a small part reserved for selling to one or two local restaurants or maybe gifting to friends.

In those days much of this handcrafted albariño was vinified in wooden barrels, which would be re-used several times before eventually being replaced. This, quite naturally, resulted in huge variation and inconsistency in the finished wines – this was by far Domingo’s biggest frustration. He loved the local wines, but not so much the quality ‘lottery’ between one bottle and the next.

It was at this point in our history that the legacy of Castro Martin came into being – the construction of a brand new bodega. Domingo’s objective was to create a wine of both quality and consistency, and he employed the skills of an agricultural engineer to help him build his dream.

The resulting wine cellar, built in 1981, was unique – built on three levels, and also the very first in the region to be equipped with stainless steel tanks for winemaking. A huge investment, not only financially, but also for his faith in the future of albariño. The most significant factor in the whole story being that the Denomination of Rias Baixas itself was not officially recognised until 7 years later, in 1988.

In the history of the Salnés Valley Domingo Martin should always be remembered as something of a pioneer, having the foresight (and courage) to invest in the future of his village and region, and to be recognised as being one of the original founders of the Rias Baixas Denomination – this is his true legacy.

To conclude this brief biography we should perhaps mention that Don Domingo was not actually Galician (albeit that he was married to a Galician and set up a home here). He was actually born and raised in the Canary Islands, which is why, even today, Castro Martin is still known as the bodega of ‘El Canario’.