One of the biggest debates in the wine business is the exact definition of the word “Terroir”. (It is also probably one of the most frequently misused words). More significantly, we have to consider how terroir affects the wines that we make here at Bodegas Castro Martin. And that’s quite a tough question to answer.

I should start by saying that ALL of the wines we make in our bodega are made using one single grape variety – Albariño. The regulations of our denomination dictates that for a wine to be named as albariño on the label, then it has to be made from 100% albariño grapes.

Every albariño grape that we harvest is vinified in exactly the same way, and so how can we explain why many of the tanks exhibit slightly different characteristics from one another? Surely it would be reasonable to assume that if every tank is made from the same grape, using the same techniques, then they should all be exactly the same…. but they are not, and at least some of these small, subtle differences can be attributed to terroir.

So how do we define terroir? Well, it’s probably true to say that not only does every country or wine region have their own definition, but sometimes even the individual winemakers will have his or her own interpretation of what it means, and what it brings to their wine. The only indisputable fact about ‘terroir’, it would seem, is that its origin is French.

The problem is that there has really never been any conclusive, universal agreement.

Here at Castro Martin there is no doubt that the composition of the soil itself plays a significant role in the equation, but the popular myth that flavour compounds of the soil can be transferred directly to the grapes is just not true. Whilst not entirely impossible, it will usually happen in a more indirect way, whereby the type of ground will actually impact the metabolism of the vine plant and therefore influence the way in which the grape bunches themselves will evolve. 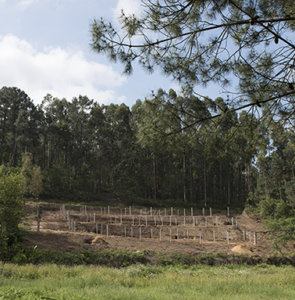 Soil effectively feeds the vine, primarily with water, but then also dissolved mineral ions. High or low pH will alter acidity and will cause changes in the texture and mouthfeel of the wine. A high incidence of granite for example, such as we have in Galicia, will contribute to the notably acidic edge of our Salnés albariños. Deposits of quartzite, metamorphic rock can also be found in some of our local vineyards.

We perhaps, mistakenly, talk of the ‘minerality’ of a wine (not a unique characteristic of the albariño variety), which again we believe originates solely from mineral-rich soils – this distinctive style is also often described as being ‘elegant’, ‘lean’, ‘pure’ and ‘acid’. Unfortunately, pure science does not support this idea, and so it could perhaps be purely down to our imaginations or possibly some form of autosuggestion.

Of course, the type of rock or soil in a particular vineyard can also reflect or retain the heat, and this factor can also have considerable influence on the overall ripeness of the fruit – but that is simple physics. Soil type is not only influenced by heat, but also it has a huge influence on the amount of water that reaches the plant, and how much of this water is retained. Our own sandy, alluvial soils tend to drain quite well, although they also enable the plant to reach down to find the necessary nutrients and water without being too rich. It is probably true to say that the harder the vine has to work to find nutrients and water, then, quite often, the better the wine it produces (provided, of course, that the vine is not over-stressed).

The natural ‘aspect’ of a vineyard will have a huge influence on the vines, and the quality of fruit produced. Vineyards on more southerly facing slopes would normally be considered the most abundant, and, assuming correct canopy management, should produce the healthiest, ripest fruit. Riper fruit will always contain more sugar and therefore potentially, produce higher alcohol wines. In albariño wines high alcohol is not always the most desirable attribute, as over-ripe fruit will also mean lower acidity – in the end it all comes down to balance, and to a large degree, can be determined by choosing the optimum moment for harvest. However, exposure to sunlight is not only controlled by the aspect of the vineyard, but can also be regulated by the density of the canopy. Thinning the foliage surrounding the fruit by hand during the summer will also give the fruit better exposure.

It also goes without saying that the climate itself plays a huge roll in how our grapes will develop, which is why no two vintages are ever the same – some vintages may be similar, but they are never the same, and often evolve quite differently. Climate, especially so near to the Ocean, can also be very localised, and influenced by other less obvious factors – sea mists (which can be very cooling in the summer heat), exposure to winds (that can have a drying or cooling effect), proximity to forests (that can provide extra shelter).

The real conclusion is therefore, that there are any number of physical and climatic conditions that will influence the way in which a vine grows and produces its annual crop, each small factor imparting some small, but sometimes significant nuance to the ripened fruit. It is really all of these contributory factors that when added together become the true definition of “Terroir”. The conundrum however, still remains – the influence that each individual factor imparts to the finished wine is still impossible to quantify (perhaps until we pull the cork!)

Footnote: Please bear in mind that the D.O. of Rias Baixas has a total surface area of only 4,000 hecatares, but that this is divided into nearly 22,000 individual vineyard sites. With this huge number of tiny sites it would simply be impossible to calculate how much the ‘Terroir’ could influence each one individually. Even the growers and producers themselves might not be able to fully explain it.