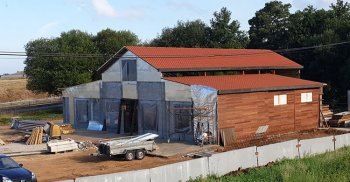 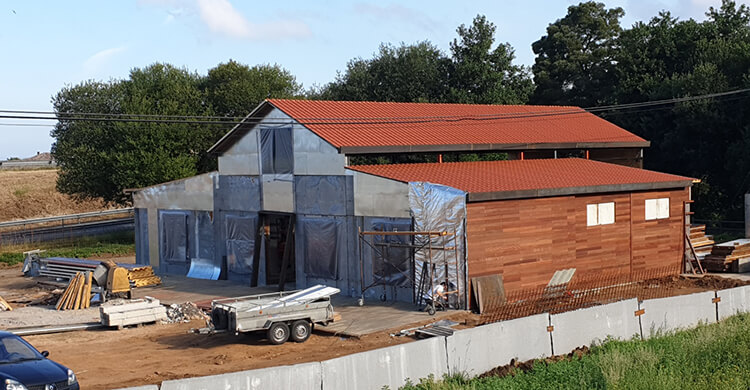 This has nothing to do with wine…. On my way to work every day I pass this strange new building, which has been under construction for several months now. The thing that I found most odd was that, located at the very heart of the building is a 40ft shipping container (I posted a photo some time ago). Around this was built a metal skeleton, followed by layers of odd building materials, galvanised metal, wood, aluminium, then more wood as its outer shell. As they added the roof the structure actually started to take on a more ‘normal’ outward appearance, although I still can’t forget that there’s a shipping container right at its core.

So as the construction slowly took shape my favourite past-time became trying to guess its final function. My thinking was, originally, along the lines of some sort of storage shed – until they added some large windows at the front and then finally put a sign on the fence. Apparently it is going to be a café/bar!

On face value it’s in a bit of an odd location (near a motorway exit, albeit not intended for motorists). The reality is however, that it’s actually quite near to ‘La Ruta da Pedra e da Auga‘ (the route of stone and water). The Ruta is an 8km hiking path that runs alongside the Armenteira river through the municipalities of Ribadumia and Meis. It is extremely picturesque and comes highly recommended, but please note that it is, in fact, a well-known tourist attraction, and that the calm and tranquility can be a bit spoilt at peak times of year simply by the large number of visitors.