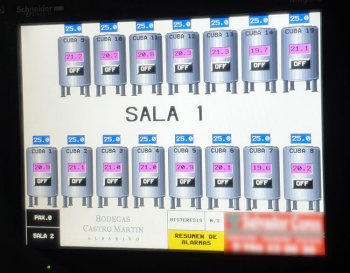 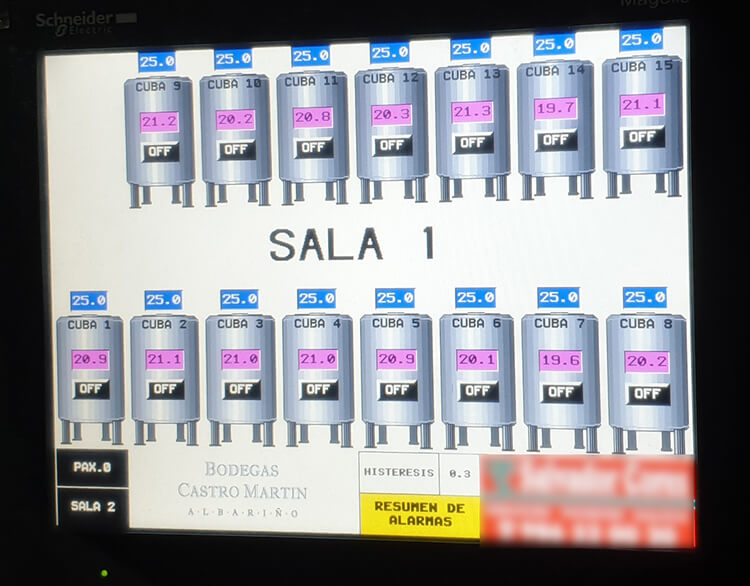 Day four – yet another hot sunny day, but perhaps not for long. The forecast for the beginning of next week shows the possibility of rain. The race is now on to finish by the weekend!

Of course, after saying that yesterday that everything went smoothly, today was a different story. The problem was not with the harvest itself, but rather with our brand new temperature control system in the bodega. (At the moment we are using this to chill the grape must in our tanks, simply as it settles better when it is a little colder).

In our bodega we have mainly small tanks of 9,000 litres, but we also have a number of larger tanks of 25,000 litres. The temperature control of the small tanks worked perfectly, but when we fired up the large tanks, then it was a case of “Houston, we have a problem”! They simply didn’t do what we wanted them to do. Tanks that were switched off started to chill, and tanks that we wanted to use simply wouldn’t chill at all. We called the technicians who installed the new system….

OK, so the technicians came and went, apparently leaving everything in working order – except that it was not! Several hours after the problem became apparent it was finally resolved by one of our own guys. He discovered that all the electro-valves had been installed in reverse! Who needs technicians?!