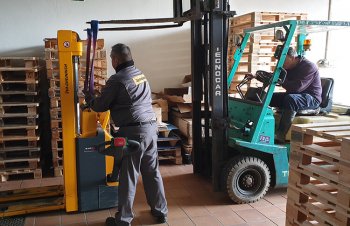 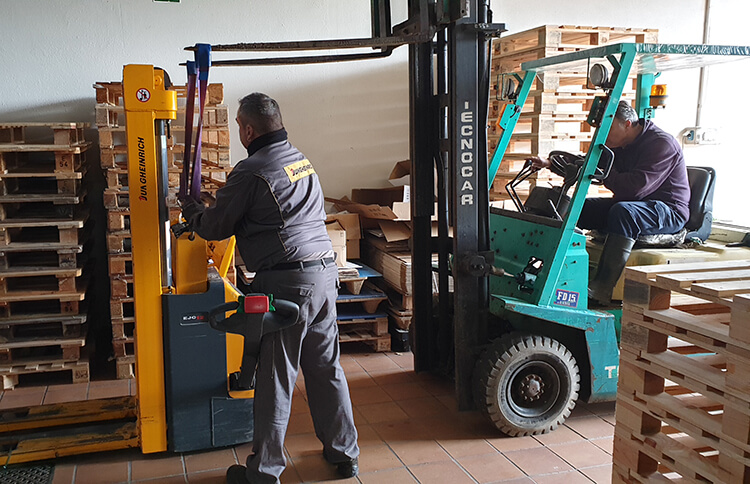 In Spanish, if you want to encourage someone to ‘get a move on’, one of the expressions that is used is “ponte las pilas”, which translated means ‘put the batteries’. Today at Castro Martin, we were, quite literally, putting the batteries!

We have a small, electric pallet truck that we use for stacking our stock in the bodega. Technically, I think it is known as a pedestrian operated pallet truck, simply as it is not a model that you can actually sit on. Like all re-chargeable electric vehicles, it’s battery has a limited ‘shelf-life’ which, not unlike your mobile phone, will eventually stop holding a charge (or at least charge for such a short time that it becomes almost redundant). Our pallet truck has now reached that point.

The replacement battery was sent in advance, so that it would be ready, in situ, for the technician to simply come and install. Although, as often happens, things are never quite that simple…. Firstly, we had to use a second forklift just to hmanoeuvre the super-heavy battery in and out of our small machine. Then, having taken out the old one, we lowered the new one into position, only to discover that the manufacturer had sent the wrong size (and capacity) for the model we have!

At the end of all this time and effort, we eventually ended up exactly where we started – with a battery that doesn’t hold its charge.