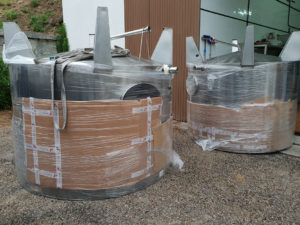 After a week away from the bodega our tanks (or should I say half-tanks?) have arrived home, complete with their new shirts. These bottom sections have had new cooling jackets added, to make them more efficient and improve temperature control, especially during fermentation. In English we call them ‘jackets’ whereas the Spanish call them ‘camisas’, which literally translated means shirts.

Obviously it is now down to the simple matter of welding them back together again, which is a highly specialised job, and a good deal more difficult than the process of cutting them. Having said that, the guys who do this work are so good, that once complete you can barely see the join. I will probably add a short video later in the week.

(By the way, the cardboard wrapped around the tanks in the photo are merely there to protect the jackets whilst in transit, this does not form a part of the tank insulation itself – we are just a bit more hi-tech than that! Also, the tanks are turned upside-down, so the strange fins that you see on top are actually the feet).