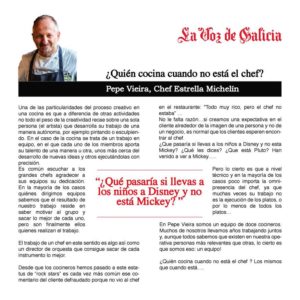 Just after I wrote this post, and purely by co-incidence, this article appeared in our local press. Obviously my views differ slightly from that of the author (click on article to enlarge).

A question that I often ask myself, and that is apparently a frequently asked question is – when a restaurant is awarded a Michelin star, does the star belong to the chef or the restaurant? The answer is not quite as clear cut as you might think. Certainly is is the chef who takes the accolades for his menu, but in reality Michelin stars are awarded for the total experience including service, wine list, amenities, general ambiance etc.

Once awarded a star or two does this then mean that the chef has to spend all his waking hours cooking and supervising his kitchen? Well, no, not at all (much to my own chagrin). A chef can apparently train a head chef to prepare his menu and then, if he wishes, move on to set up another enterprise, which explains how a chef can run several different establishments at the same time, clocking up Michelin stars around the country. Indeed there are some celebrity chefs that have been awarded a multitude of stars in a number of different locations (sometimes on different continents!).

Of course, if said chef sells up, moves or forms a different company, then the star rating does not automatically follow him or her, it stays with the restaurant. In these circumstances the restaurant would normally be re-reviewed pretty quickly.

I suppose these ‘roaming’ chefs are a little like flying winemakers, they make their mark and then ‘hover’ around different locations, juggling to keep all the pieces in place.

Call me old-fashioned, but I like to see a talented chef where he should be, in his kitchen, showing off his cooking skills to the paying public.