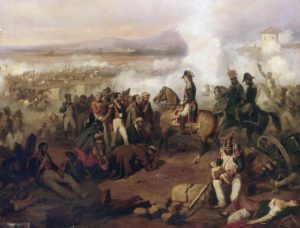 A day or so ago I posted an image of a local festival on our page, depicting a crazed monk beating French soldiers over the head. And thereby lies the clue: they were French soldiers.

To cut a long story short, the celebration in Mos this month is to mark a significant Spanish victory in the liberation of Galicia, as they expelled the invading French army. March 23rd 1809 signalled the beginning of the end for Napoleon’s Iberian campaign in the Peninsular Wars fought between Napoleon, the Spanish Empire, the United Kingdom and the Kingdom of Portugal.

Starting in 1807, as Napoleon sought to occupy the Iberian Peninsula, the joint forces of France and Spain invaded Portugal. However, less than a year later, the French turned on their Spanish allies, and the depleted Spanish forces were easily overcome. Eventually, in November 1808 the Spanish Junta was forced to abandon Madrid.

The fight back, lead by a Spanish resistance that continually harassed the occupying forces (considered to be the first evidence of guerrilla warfare) started in early 1809, with Vigo and Pontevedra being among the very first Spanish regions to be liberated.

In today’s image (posted originally on the Instagram of that time) there is no firm evidence that monks were guilty of assaulting any French troops. Proof, if it were needed, that fake news has existed for many years!