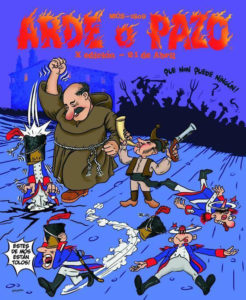 Now here’s a local poster that caught my eye, originating from the small town of Mós, near Vigo. Of course, it is just one more example of the numerous Fiestas and Celebrations that take place every week here in Galicia (and all around Spain). Today I will not explain exactly what it represents, but leave you to ponder for a day or two. I must confess that initially I had no idea what it was myself, and had to do a bit of research to find out. Suffice to say that it is some sort of historical re-enactment that apparently involves monks hitting uniformed soldiers over the head! The explanation will come later….