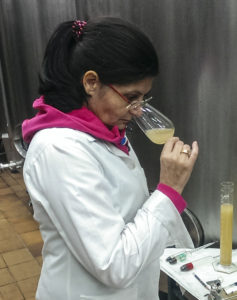 Maybe it’s my imagination but there appears to be an increasing number of National and International days with every year that passes – some that I hear about, and others that I don’t. For example, did you know that yesterday was National Oreos Day – yes, Oreos the biscuit. So how many people did you wish ‘Happy Oreos Day’ or perhaps you simply ate a celebratory packet with friends (or by yourself!)

Clearly, some of the special days are just a bit tongue in cheek, whilst others are a good deal more serious. One of the most prominent such days is International Women’s Day when we celebrate the social, economic, cultural and political achievements of women.

Here at Bodegas Castro Martin for example, we mostly celebrate the achievements of Angela Martin, our boss (my boss) and our winemaker. Back in 1993 when she assumed the day-to-day management of Castro Martin there were very few women in her position in Galicia. Indeed, she was one of the women pioneers of Rias Baixas, where today, nearly 25 years later, it is quite common to find women winemakers in many of the very top bodegas. Local recognition of her accomplishments came in the year 2000 when she was made a Dama do Albariño, in a ceremony held during our own National Albariño Day in Cambados.

Today, we have only a very small team working full time in our bodega, but even so, nearly half of our team is made up of women. On this day we celebrate them, their efforts and unerring support in helping to put Castro Martin well and truly on the world wine map. So let’s raise a glass of A2O to the ladies of BCM!