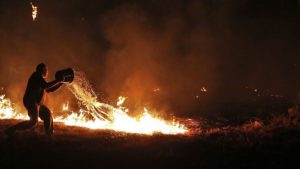 Yesterday was a black day in Galicia – when forest fires suddenly sprung up in nearly every corner of our Province. It was almost as though they had been orchestrated, and indeed, Police are already saying that many had been started deliberately.

Meteor-logically Sunday was already quite odd, in that by 8.30am on this mid-October day, the outside temperature was 23°C / 74°F (even before the sun had appeared over the horizon). The wind had picked up, blowing directly from the south, which after a summer of very little rainfall, had created the perfect environment for forest fires. (These warm winds had long been forecast, which is why I suspected that perhaps the pyromaniacs had chosen this particular moment to strike).

Three people died during the night, many homes and some businesses were destroyed, and one petrol station exploded in the inferno. Local people were rushing around with buckets, forming human chains, in a futile attempt to protect their homes. Of course, this was nothing on the scale of the catastrophe in California, but when people die, it is still a very serious event. The only positive note to this story is that it did start to rain, and I believe that this has helped to bring at least some of the fires under control. Today is still damp, so hopefully relief will come quite quickly.