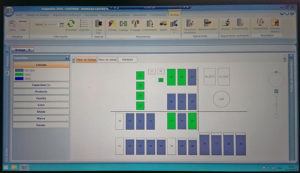 Just before the harvest (apart from all our preparation work), we were occupied by a series of computer training sessions. Well, not so much computer training, but rather software training. During 2017 we have been progressively rolling out our new, updated software package. We started with accounts, eventually moving on to stock, bottling, labelling and then finally, we turned to the harvest. This has been a huge undertaking, and despite the training (carried out mostly at break-neck speed), we are now trying to put into practice all the procedures that we were shown in theory – and it is by no means an easy task!

Indeed, we made a decision at the very beginning of the harvest that we would only enter the bare minimum of information into the system, and the vast majority we would input later when the pressure was off (keeping copious records on paper as in previous vintages). The last couple of weeks, we have spent hour after hour staring at our screens, sometimes just trying to figure out how to make it all work – connecting the theory with the reality is not quite as simple as you might think.

Although today’s photo is not very high quality you might still be able to make out that nearly every tank in our cellar is full. A few tanks are deliberately left empty merely give us some space to work – for example, when racking, we need to have at least one empty tank to re-locate the wine.