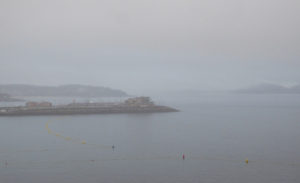 For the last four or five days Lucifer has been sweeping across Europe (but don’t worry, I don’t mean that we have been overtaken by devil worship, it’s simply the nickname given to the recent spell of excessively hot weather). You may have read in the press or seen on TV that parts of Spain and Italy have been enduring temperatures of between 40 and 45°C (105-115°F). Severe weather warnings have been issued…. but not here in Galicia. The last couple of days here have been very, very grey and overcast (see photo) with long periods of drizzle, and temperatures of the low-to-mid 20’sC (70-75°F). This is not ideal weather for growing grapes, but at least the forecast is for improvement in the next day or so.

Just a quick anecdote on this subject if I may. The BBC was interviewing a British family on holiday in Cyprus, where the temperature had reached 43°C, and people had been advised to stay indoors during the afternoon. The interviewer asked what precautions the father had taken to protect his two young daughters, and I’m not sure if his response was typical British phlegm or just plain stupid – “we have put on sunscreen and are eating lots of ice cream.” In ‘Britspeak’ this means “I’ve paid for this sunshine, and by God, I’m going to enjoy it (whatever the possible consequences)!”