Irrigation? What? In Galicia? 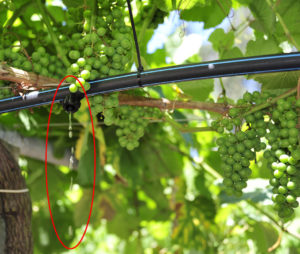 For many years I have been under a slight misapprehension…. that irrigation of the vineyards was, at the very least, frowned upon, and to some extent, illegal! I think that this is probably a throw back to my early days in the wine trade, when the majority of ‘old world’ countries did not allow a single drop of water to be used in the vineyards, whilst the ‘new world’ producers (who used it extensively) were considered by Europe as charlatans, spraying water everywhere with impunity.

The interesting fact is that since around the turn of the millennium, things have been changing – but in a very quiet, almost stealth-like manner, as the traditional wine producing areas of Europe slowly adopted their wine laws to allow irrigation to be introduced. Certainly this is still done with an element of control as, for example, in some areas it is only allowed during certain summer months.

Of course, having made all the initial fuss about the ‘cheating’ new world producers, the old world soon came to accept (persuaded perhaps by the onset of global-warming), that allowing the use of water was actually quite a sensible thing. For me personally, the idea of irrigation is quite similar to the use of treatments in a vineyard – no sensible producer is going to sit back and watch his fruit rot on the vine if there is some step that he can take to prevent it. Yes, we all use products that are as ecological as possible to treat our vines, but in the end it’s all still a form of intervention. And so, logically, if your vines are wilting in the heat (and consuming all their sugars to survive), then just give them a drop of water – no so much as to inflate the berries, just just enough to keep them ‘comfortable’.

Today’s photo shows the drip irrigation that we have just added to our bodega vineyard, where the upper part can be particularly dry in hot weather. The irony is that, as I write this, it’s actually raining!