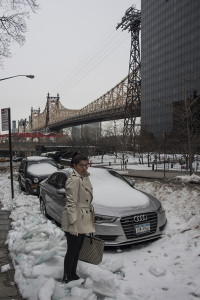 If you have been following our page you will know that our planned US tour got off to a rather shaky start – our Trans-Atlantic flight being cancelled the night before we were due to leave (thanks to winter storm ‘Stella’ blanketing New York in snow). We finally got off the ground on Wednesday night, for an overnight stay in Madrid before our re-routed journey through London and onward flight to New York. On Thursday morning we soon discovered that London was shrouded in fog, and that all flights going in were subject to delays, it really felt like the weather Gods were conspiring against us. Suffice to say that our leisurely connection was reduced to a quick sprint across the Heathrow’s Terminal 5. Luckily we just made it in time…. but unfortunately some of our luggage did not! Our last suitcase arrived several hours later and was delivered to our hotel room at 3am! Being disturbed at 3am and already suffering from a lack of sleep, it was just the proverbial ‘icing on the cake’ – the culmination of our on-off, nightmare journey.

Despite all the setbacks, our reduced time in New York (and New Jersey) was well spent, and we at least managed to achieve the most important goals of our foreshortened itinerary. Having said that, leaving the warm spring sunshine of Galicia (20+°C or 70°F) to arrive in the freezing temperatures and icy winds of New York, required quite an adjustment. As you can clearly see from today’s photo, standing on an icy street (in front of the Queensboro Bridge) was possibly not Angela’s idea of a fun time!

So, our next stop is the ‘Mile High’ City of Denver, to catch up with old (business) friends, where, at the foot of the Rocky Mountains, temperatures are unseasonably warm at around 25/26°C (mid-70’s F). A dramatic change of wardrobe is required!