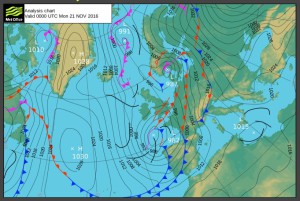 As pruning gets underway in our vineyards, then so we are greeted by our first storms of the winter 2016/2017. After a long, dry summer, there have been some days of rain, but nothing really sustained and heavy, as we would normally expect during a typical Galician winter. That was until yesterday when we experienced a prolonged period of high winds and driving rain during the late evening. Not enough to cause any damage or flooding, but still quite a torrential downpour.

This first winter storm arrived from the Atlantic and was christened ‘Angus’ by UK weather experts (the name suggests that it should perhaps, have originated in Scotland). Indeed, the whole concept of naming storms is slightly odd in that, for the UK at least, the public were simply asked to suggest names to the Met Office. From these suggestions they compiled a list of names that will be used over the winter (but only for the more significant and potentially damaging storms). Later this year be prepared for Storms Doris and Wilbert!

Atlantic hurricanes are always give female names that are allocated by the World Meteorological Organization. The names come from six lists that are rotated on an annual basis. The idea of naming of storms was actually to make it easier for the public (especially those living on the coast) to track them. Prior to this a somewhat complicated system of latitude-longitude numbers had been used.