‘En rama’, sherry in the raw 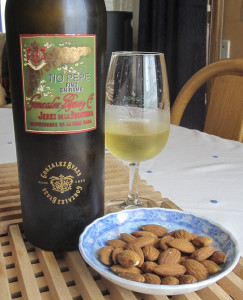 An old mate of mine, Joe Wadsack, recently visited Jerez, and was consequently waxing lyrical about some of the great wines that he’d tasted there – and quite right too. Sherry used to be considered the drink of the older generation – the sort of thing that your grandma might enjoy before her Christmas lunch. These days it’s become quite a bit more hip…..

Don’t get me wrong, sherry is still something of an acquired taste, and would not necessarily form a part of anyone’s introduction to wine drinking. It’s probably something that features later in a wine drinker’s career, when the palate has mellowed and become perhaps, well, a little more discerning.

From Fino to Palo Cortado, there’s a very wide range of styles and flavours to chose from, and the vocabulary used to describe them can be just as wide – salty, nutty, yeasty, bready, smoky, the list goes on.

Following the recommendation of one of Joe’s best friends, Victoria Moore (Daily Telegraph), I decided to buy a few bottles of a limited edition sherry from Gonzalez Byass. Their Tio Pepe Fino ‘en rama’ 2016 has just been released, and is completely delicious. Drawn straight from the barrel without fining or filtration, like many dry sherries it has to be drunk whilst it’s still young and fresh. It’s salty, it’s savoury, it’s yeasty, it’s nutty, it’s, well, superb and really needs to be tasted.

Of course, living in Spain makes access to the limited stock (of just 60 casks a year), just that bit easier, and dare I say, a whole lot cheaper. So if you can find it, then it’s certainly worth grabbing a bottle, or maybe two.