You can’t see the wood for the trees… 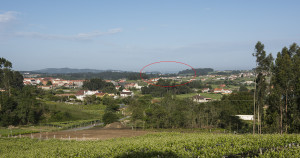 Over a dozen years ago, when I first arrived at Castro Martin an integral part of our bodega tour was to take visitors upstairs, to the rear of the building, and show them both the view of Salnés and our proximity to the Atlantic Ocean. In recent years however, this had become impossible, owing to a forest of tall eucalyptus trees that had sprung up behind us.

The eucalyptus is not indigenous to Galicia, but rather was planted extensively throughout the region as a source of fast growing, cheap timber. The species was originally imported from Australia, and has been actively promoted by the paper industry since the mid-20th century. Compared to other parts of Spain, Galicia still has many densely wooded areas, which, during prolonged periods of dry weather, can cause a problem with some significant forest fires.

By coincidence, only last week, I took a group of American visitors up to a ‘mirador’ (look out point) on a local hillside to show them a complete view of our valley, only to discover that it is now partially obscured by eucalyptus, now seemingly growing out of control.

The good news is however, that the trees at the back of our bodega have now been cut down to make way for a new vineyard (not ours), and our view has now been restored. I have highlighted the Ocean in today’s photo, and whilst it might appear like a distant speck on the horizon, it is in fact less than 5km (3miles) from our back door.