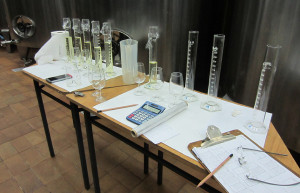 Crushing grapes and fermentation are only the early steps in our extended wine making adventure. Since the harvest, more than six months ago, our tanks have been resting quietly on their lees, and it is only now that we first contemplate how the finished 2015 wines might look. After regular tasting during this ageing period we pretty much know the distinct ‘personality’ of each and every tank. You would be forgiven for thinking that they are all pretty much the same, and whilst that is partly true (they all share their distinctive Salnés character), in the end, no two tanks are ever exactly the same. This is where another invaluable winemaking skill comes to the fore…….blending.

Again, it might seem odd, that in a winery which only cultivates one grape variety, that any blending would be required. However, the objective of this practice is not only to produce the style of wine that our customers have come to recognise, but also to provide continuity of that style for the duration of the vintage. By blending several tanks together we can produce much greater uniformity, in order that when we bottle our tanks throughout the year, the only discernible difference will be the actual maturity of the wine, and not our signature Castro Martin character.

This first blending exercise was merely to give us a snapshot of what might be, and was by no means the definitive selection. With 20 tanks of new wine to chose from the permutations are almost infinite, but nevertheless it is still one of the most satisfying jobs in the cellar. I compare our tanks to the ingredients in a kitchen, and the blending to creating a new recipe. A great deal of trial and error but still very rewarding when the completed ‘dish’ reaches the table.