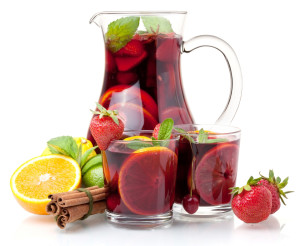 On the first official day of Spring, it’s maybe time to think about changing our drinking habits. Lock away the heavier, warming winter red wines and break out the lighter, fruity reds, or maybe even an odd summer white (including the Castro Martin of course!)

One of the other spring/summer options is Sangria, widely served in Spain and Portugal, but most probably first created by the Romans. As they expanded their Empire across Europe it seems that they may have used wine to sanitise their drinking water, and hence the first Sangria was created. Adding fruit and spices simply evolved out of boredom – centuries ago wine consumers didn’t have a wide selection of different varietals to chose from, and so adding fruits was merely a way of creating new flavours to enjoy.

The point is that there isn’t really any fixed ‘recipe’ for making Sangria, the only common ingredient being the wine. Of course our beloved EU paper pushers have now come up with an official definition – the simplified version is that it is an aromatised wine of less than 12% volume, that may be enhanced by natural fruit juices or extracts, and that it may be carbonised. The possibilities and permutations are therefore endless. The alcohol content can vary by anything from 4% to 12%, and in some countries it is actually made using white wine (although this might be considered odd as the word Sangria literally translates to ‘bloodletting’, which (rather grimly) implies that it is made from red wine).

In any event, Sangria provides a great way to test your ‘mixology’ this summer….