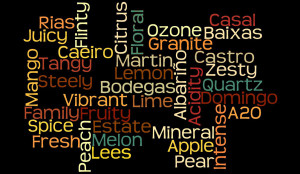 A little while ago I read a very interesting article in the Wall Street Journal, about the vocabulary that we use when describing wine. It occurred to me that, as a wine professional, there are probably some words that we use when describing wine which might not be fully understood by the average wine consumer. Thankfully we have wine journalists who are by far the most gifted when it comes to translating the taste of wine into words that we can all understand. It’s really not that easy, and even when we do it, there might still be some expressions that the amateur drinker might fail to comprehend completely, or at the very least misinterpret as something different.

One such, quite commonly used wine word, is ‘creamy’ (often used in association with the word buttery). Of course, in the context of wine it doesn’t mean that your glass will be opaque, but is actually used to describe a soft, ripe, rich, well-rounded white wine such as an oaked chardonnay. The lactic, dairy flavours (and mouth filling sensations) are the by-product of the wine-making process which produces an organic compound called diacetyl.

A word such as creamy is probably quite easy to grasp when compared to some of the others you might encounter, such as mousy, foxy, rancio, barnyard, gravel or flinty. Although, as in the case of creamy, the adjective used might not simply describe a taste, but might actually represent a sensation in the mouth – almost like a texture. I mentioned gravel and flint in my very short list of examples, and these are elements that we possibly do smell in day-today life, but simply don’t associate with wine. Of course, you could always wet a stone or a piece of flint and smell it, or even try licking it (if it’s clean!). Flinty, for example, is often used to describe a sharp, zippy, fresh, but dry white wine, perhaps with a good lick of acidity – wines such as Pouilly Fumé or perhaps a Chablis. These words come under a general heading that might be described as minerality. (A term that I nearly always use for our Castro Martin Family Estate albariño).

Other odd words include cat’s pee, iodine, leather, rubber, petrol, tar, and then others like chewy, fleshy, dumb, lifted – the list goes on, and that is without mentioning a few common wine faults – reduction, volatility, oxidation, maderisation, corkiness (TCA) and bretty (Brettanomyces).