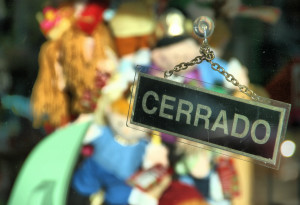 This morning I had three separate chores to do in the centre of Pontevedra – visiting three separate businesses. The problem was that I had no idea what time they opened, and so I made a quick search on Google. The result was not really what I wanted. One opened at 8am, the second at 9am, and the last one at 9.30am. Clearly I didn’t want to hang around in town waiting for the third business to open, so the only option was to wait at home until just before 9.30. This was really frustrating and I just felt like I was wasting my morning….

It occurred to me that the situation is actually much worse than this, if you examine Spanish business hours in general. Businesses can open at more or less any hour between 8am and 10/10.30am in the morning, and then close again for lunch at any time between 1.30pm and 2.30pm. And guess what? This very same scenario is repeated again in the evening! Shops and offices re-open between 3.30pm and 5.30pm, and then close again at any time up until about 10pm. I have to say that this system doesn’t strike me as being particularly efficient (or convenient). For example, unless you know the opening and closing times of every business that you want to contact or visit, then it can be quite complicated. (Without mentioning the fact that the very same businesses can, and do, vary their hours between winter and summer!)

Weekends are another story…. Many shops still close for the weekend at lunch time on Saturday, which would appear to be a bit of an archaic practice – especially in times of recession when you really need to maximise your income. Shops are closed on Sundays here in the provinces (but much less so in the big cities these days). Here in the ‘sticks’ shops are allowed to open for a limited (and controlled) number of Sundays throughout the year, normally around Christmas or ‘Sale’ periods.

At Castro Martin we only make one small adjustment to our timetable during the year, between winter and summer. In winter we start an hour later at 9am, but this is simply because of daylight hours. On winter mornings our guys cannot prune vines in the dark, hence the fact that we start a little later.