The carnival is over 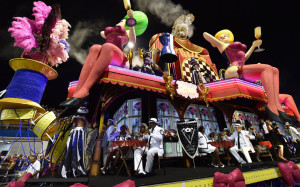 That albariño looks a bit yellow!

The last week in Galicia (and indeed around the world) has been Carnival time. Unfortunately, we are not blessed with the same weather as Rio de Janeiro where the scantily clad samba schools shimmy their way through the hot and humid Sambadrome. Here it’s more a case of sheepskin bikinis, or any costume that will protect you in some way from the cold, damp February chill. Indeed, this year has been worse than most, as yet another storm system swept across western Europe bring high winds and dumping huge amounts of rain. Many Carnival festivities were either cancelled or have at least been postponed, so that all the effort of elaborate costumes and floats does not go totally to waste.

Carnival is also known as Mardi Gras (fat Tuesday), and is a Christian feast – the feast before the ritual fasting period of Lent. Originally it was the day when people filled themselves with fatty foods, or perhaps meat, to sustain them over a 40 day period until Easter. The word carnival itself probably derives from the Italian ‘carne levare’ meaning ‘to remove meat’, and the very first carnival parades were also recorded in medieval Italy – for a long time the Carnival of Venice was considered the most famous.