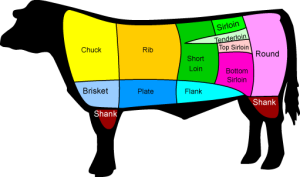 Today is yet another National Holiday in Spain – the day of the Magic Kings (Reyes Magos), known in other countries as Epiphany – the arrival of the Three Kings in the Nativity. It is celebrated in many villages, towns and cities with spectacular parades reenacting the arrival of the three kings, symbolised by the giving of sweets and small presents.

This year, certainly here in Galicia at least, it is possible that the celebrations could be a bit muted….. by the weather. Since the turn of the year we have experienced days of non-stop rain – dark, leaden skies, it has been thoroughly miserable (albeit that temperatures have been unseasonably mild). I seem to recall that this is in complete contrast to the Reyes holiday of last year, when we enjoyed sunny, blue skies during the day, but with temperatures below freezing at night.

There is however, something very different that we could be celebrating at this time of year. In the U.S. it is National Meat Month. To be honest I’m not completely sure of the origins of this tradition, but it does afford Americans the excuse to enjoy even more meat than they usually do. With an average consumption of 270lbs (123kg) of meat per person per year, which is nearly three times more than the world average of just over 100lbs (46kg), you would be forgiven for thinking that the Americans are world leaders, whereas actually they take second place, behind…… Luxembourg (of all places)! In terms of the type of meat consumed in the U.S., beef and pork were tied throughout the 1950’s. Beef then became the dominant protein up until the turn of the millennium, until eventually chicken overtook it as the most consumed meat only a few years ago. No doubt Colonel Saunders will be quite thrilled!