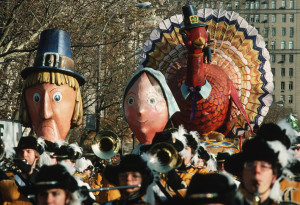 Tomorrow is Thanksgiving, and so the obvious question arises, which wine should you drink with your turkey (or whilst watching the NFL)? Of course I could tell you that albariño is not bad with white meat, assuming that it is roasted in the traditional way and not served with some exotic sauce, but if I was to put my hand on my heart, I would have to admit that there could actually be better food/wine matches for turkey. Unfortunately, in our business, there are far too many producers who would swear blind that their particular wine is great with everything, including pumpkin pie, but I’m just not one of them!

It’s just a great pity (from our point of view) that today’s traditional Thanksgiving menu does not accurately reflect the menu of the very first Thanksgiving meal back in 1621. When the Pilgrims celebrated their first harvest and invited the local Native Americans to eat at their table, the foods on offer were almost certainly a little different, or so the historians would have us believe. Not only would they have consumed fowl such as duck, goose, swan or perhaps even turkey, but it is also suggested that they may have eaten deer that their Wampanoag guests offered up as an additional menu item. The very first harvest was apparently quite abundant and also provided the pilgrims with onions, beans, lettuce, spinach, cabbage, carrots, peas and perhaps some corn, but being in New England, it is also quite likely that some seafood might have been consumed. Mussels, lobster, bass, clams and oysters could also have been part of the feast, but regrettably not with any albariño, that didn’t arrive until a few centuries later!