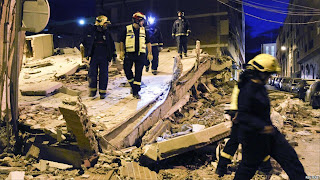 These days we are so used to watching big budget disaster movies, and news footage from distant shores on our TV screens , that it has become all to easy to detach ourselves from the reality of life. That is, until the disaster unfolds on your very own doorstep.

After earth quake disaster in New Zealand and the utter devastation of Japan’s huge quake and tsunami, we now have death and destruction in Murcia, Southern Spain (only 120km from Alicante). Although the quake measured only 5,2 on the Richter scale it occured only 1km below the earth’s surface, and was therefore more damaging. At the time of writing it is reported that  10 people have lost their lives, mostly crushed by falling buildings. It is more than 50 years since Spain experienced a quake of this magnitude, and it was neither predicted, nor expected.

Well, perhaps that is not completely true….

Very, very strangely an earthquake was predicted on 11th May 2011, but in Italy. Many Italians fled Rome amid fears of a pending earthquake! In 1915 the late Italian self-styled seismologist Raffaele Bendandi predicted that the “the big one” would strike Rome on this exact date. Panic developed as rumors spread across social media networks including Facebook, Twitter, and some Italians actually evacuated the city.

Unfortunately for all concerned, right date, but simply the wrong country.