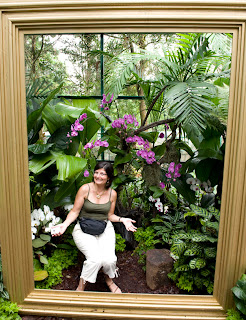 Around this time last year I seem to recall posting a picture of some highly coloured blooms as a representation of the flowering in our vineyards, and this year is no exception. Nothing to do with our vines, but at least a bit more colourful to look at!

On a more serious note, we have an extremely early flowering just starting here in Galicia. The temperature as I write is about 27°C (just over 80°F) and the forecast for the rest of the week is set fair, so all looks quite rosey in our garden (if you’ll pardon the pun). The number of bunches per vine appears to indicate a big harvest, albeit that this is no guarantee of real quality, and so I rather suspect that there will be a good deal of ‘green harvesting’ during the summer months.

Naturally this early flowering (probably at least two weeks earlier than normal), will mean that the 2011 harvest will be premature too. If the fine weather continues I would estimate picking at the very beginning of September, similar to our 2006 vintage. Only time will tell.