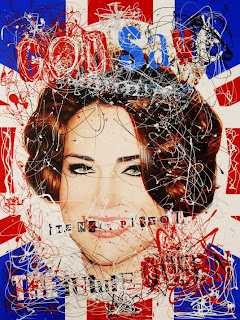 I don’t suppose that I could really let this week pass without making some comment about the Royal Wedding – and don’t try to pretend that you don’t know which wedding I’m talking about…. The coverage here in Spain has been almost as extensive as that in the UK, and I was actually quite amused to see the infamous TV movie of Kate and William on our screens yesterday evening. Of course it was made doubly funny as, not only did the actors bear little resemblance to our Royal couple, but on top of that they were dubbed into Spanish. Will I get locked in the Tower of London if I say that it was hilarious?

Anyway, to date I have not heard any mention of the type of wines they will be drinking with the Royal Wedding Buffet, but I dare say that there might be the odd bottle of Liebfraumilch floating about (which is apparently the Queen’s favourite tipple). Perhaps I should write to the Palace and tell Her Majesty that our Albariño is not wildly different from her beloved Riesling (or perhaps Muller-Thürgau). I use the word ‘beloved’ because the literal translation of Liebfraumilch is ‘beloved ladies milk’.

Of course the last time we had a Royal Wedding in Spain, we know for a fact that they did enjoy a bottle or two of Albariño with their meal, although for some odd reason we were not allowed to mention who the producers were (no Royal Warrants this time then).

Post Wedding Footnote:
One thing that I have noticed which always puzzles me, is the Spanish obsession to translate people’s names. For example, the happy couple are now officially known as Guillermo y Catalina, our Queen is Isabel, our Prince is Carlos, and his sister is Ana. Correct me if I’m wrong but I can never remember the King of Spain being referred to as King John Charles, and his wife Queen Sophie……