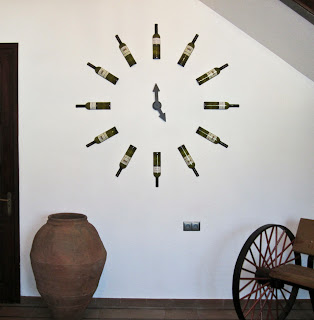 Over the last couple of months we have been ‘tarting up’ the entrance hall to our wine cellar, and you my recall my post about a huge photo montage that I set up on one of the walls.

Perhaps inspired by my wife Angela, and the fact that she is always late for everything (a woman’s prerogative I think they call it), I have now created a huge clock on one of the other walls!

But this is no ordinary clock lifted out of a box – it is my very own creation. To be honest I don’t recall where the idea came from, but the concept is really quite simple. The numbers are replaced by wine bottles. This apparently ‘simple’ concept was however, much more difficult to translate into reality…. To begin with cutting the bottles in half proved to be almost impossible, and then sticking them to the wall was also quite a problem. It’s possibly not until you actually cut a bottle in half and see its profile, that you realise how fragile it really is, and suffice to say that applying glue to a thin, sharp rim of glass is no easy task either, requiring the patience of a saint (I have to admit, not one of my greatest virtues).

So, after a couple of hours with a glue gun, not to mention my very sticky fingers, you can now see the result.

I wonder if this will mean that Angela will be on time in the future? Probably not!