Beer for dogs! What next, wine for cats? 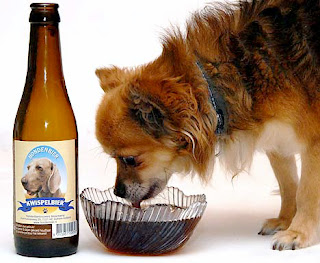 In the difficult economic climate that exists at the moment we are always looking for new ways to develop our sales.

We recently saw a beef flavoured beer especially developed for dogs, in a glass bottle with a picture of a weimaraner on the label. Imported from Holland it is called Kwispelbier, which literally translated means ‘tail-wagging beer’. Made using a traditional beer brewing technique, it contains malted barley extract and absolutely nothing harmful – consequently the dogs are really lapping it up (in every sense of the word!)

So, if they can make a beer for dogs, then why not a wine for cats? We are so near the sea that consumers often say that they can taste the salt air in our Albariño, so how about enhancing this flavour with a bit of fish or seafood? It would be quite a simple process to macerate some fish or seafood in the tanks – et voila! A new product for cats, opening a whole new world of possibilities for our bodega.

Any suggestions for a suitable name? How about ‘CataPesca’ – which loosely translated would mean ‘tasting of fish’?