Home from the sea 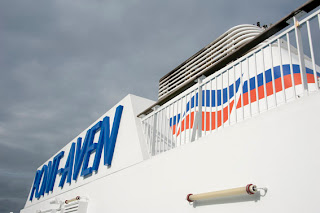 Just in case you were wondering what this photo is – it’s the funnel of a rather large ferry taken at a ‘jaunty’ angle. The Pont Aven plies its trade between Santander on Spain’s northern coast and the UK (either Plymouth or Portsmouth) crossing the rather notorious Bay of Biscay.

On my outward journey about 10 days ago the sea state was officially described as ‘moderate’ (whatever that means), but suffice to say that it was enough to keep me awake most of the night on my 24 hour crossing. Heaven only knows what it would be like on a rough sea (some friends of mine did experience a rough sea last year, and I think their expression was ‘never again’, or words to that effect)

Spending 24 hours on a gently swaying ship does however, create a rather interesting sensation by playing tricks on your brain. For about a day after you eventually reach terra firma you still have the sensation that the ground is moving – or at least I did. I believe it must be something to do with your inner ear that incorporates the balance senors of your body….. mine is obviously all at sea!

So, I’m finally back in the office after about a month of travelling, so it’s time to get my head down, catch up, and press ahead with some of my new spring projects…… watch this space.