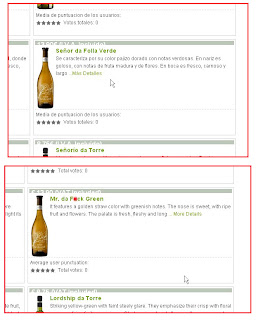 A couple of years ago I wrote about the effect of using ‘Google translate’ on a restaurant menu – it did not sound quite as appetising once the old software had got to work on it:

Brandada of codfish, cream of sprocket wheels with apple emulsion

Even nearly two years later the same software doesn’t appear to be doing any better, as it appears to fail quite seriously with certain words by taking completely the wrong meaning. For example a local wine that appeared on a local website called Señor da Folla Verde – which should, strictly speaking, translate as Señor of the Green Leaf. Google, however, has made a real hash of it, and I can’t even begin to repeat the translation that it came up with. Perhaps if you click on the picture above you will be able to see the shocking result……