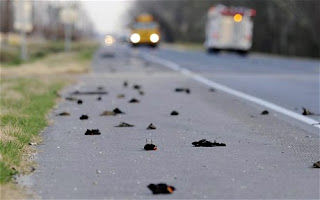 In the last few months there have been several reports of dead birds falling from the skies, which quite understandably, have been followed by investigations and conjecture as to the cause of each tragedy (including one or two conspiracy theories).

In Arkansas the deaths were blamed on New Year’s Eve fireworks that caused the birds severe trauma, effectively scaring them to death. However, and alternative theory suggests that it could have been something to do with a tornado that killed three people in the same area earlier in the day.

On 3rd and 4th January dead birds were then discovered both in Louisiana and Falkoping, Southeastern Sweden, closely followed by several hundred more in Western Kentucky and Texas.

The lack of apparent detail for the reasons behind this avian carnage has generated countless theories, ranging from the changing of the earth’s magnetic poles to, a governmental plot and, naturally, aliens!

The very latest incident in Romania has, however, been fully explained…. it has been put down to alcohol. Birds that were originally thought to have died from Avian flu, instead apparently, drank themselves to death!

Romanian officials decided the starlings had died after eating grape ‘marc’ – the leftovers from the wine-making process. The head of the local veterinary authority said that analysis of the starlings’ gizzards showed they had died from alcohol poisoning.