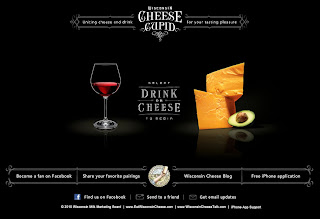 I ‘stumbled’ across an entertaining new website the other day, strangely named Wisconsin cheese cupid – the name alone is enough to make you curious, or perhaps that’s the idea.

Obviously you can take a look yourself, but the site is all about matching cheese and wine. Unfortunately they don’t list albariño, but they do have riesling, which is similar when it comes to paring with cheese. They recommend a dozen cheeses to go with that particular wine, including many with very strong flavours which sounds about right, but interestingly they do not include the strong goat’s cheese that many people think goes perfectly.

This actually reminds me of an amusing story from my wine buying days. I was once visiting the famous village of Chavignol in the Loire Valley of France, looking for some decent Sancerre to buy for my company – it was lunch time. Crottin de Chavignol is a well known goat’s cheese with its very own AOC, and as the name implies, can only be made in that very place. It was therefore not difficult to find a restaurant with cheese on the menu, and indeed, I actually selected one which had a special Crottin menu….

To cut a long story short, I think the only thing that didn’t include cheese were the salt and pepper pots on the table (although they may have been tainted). To be very frank it was a slight case of ‘overkill’, and in the end I was actually glad to leave and get back to some normal, non-cheese food! If it’s possible to have a goat’s cheese nightmare, then that was probably it.

Having said all that, try it with your albariño some time!