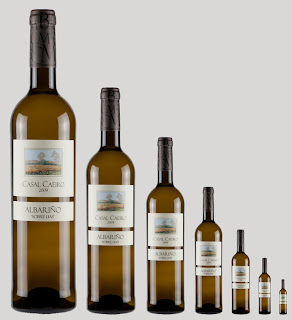 Always trying to remain at the forefront of fashion and innovation Castro Martin have now decided to follow the example set by our Spanish broadband provider – in future all bottles will be “up to” 75cl in capacity.

Working at the ‘current acceptable averages’ this will mean that in future your bottle will probably contain somewhere between 25cl and 50cl of albariño, whilst the price you pay will remain completely unaltered!

Imagine what might happen if other industries were able to escape by giving such vague assurances to their customers….. For example, you might pay €120,000 for a new Aston Martin car which the manufacturer claims has a top speed of “up to” 240 km per hour, whereas in reality its best speed might only be around 100 km per hour. What they have failed to tell you is that the maximum speed can only be achieved in exceptional circumstances, going down a steep hill with a hurricane blowing directly behind you – in other words, in conditions that you are hardly ever likely to encounter.

I am sure that no Aston Martin driver would ever accept this, so why do we accept it with our broadband? I pay for 6MB, so why do I only get an average of around 1.6MB?

I understand that this worldwide phenomena now appears to be the accepted standard, and so I have to ask myself why other industries don’t simply follow suit (apart from the fact that they would never get away with it)!