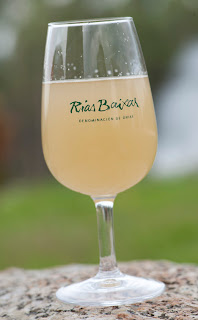 Well, yes, technically our new albariño has arrived, but not really in a state that you would want to drink it. (My picture shows a glass drawn from the tank earlier today)

After a long, slow alcoholic fermentation the wine is finally “made”, in the sense that all the sugar has now been converted to alcohol, and as there will be no malolactic fermentation this year (owing to the must having perfect acidity), there is not really much left to do, except wait…..

The wine has now been sulphured to protect it from oxidation, and the only thing that remains is an extended period of lees contact, and lots of tasting along the way. The moment that we chose to remove the wine from the lees is almost like knowing the optimum time to start picking the grapes – it is a question of experience and professional judgement and not to mention, personal taste. The length of time on the lees will ultimately determine the character of the finished wine, and we assess this by trying to replicate our ‘house style’. In other words, we look for the individual personality to which our customers have become accustomed – rather like they do in Champagne. Each Champagne house has it’s own distinctive style, which is not only a part of their tradition, but is also a tribute to the skill of the winemaker, who produces the taste that their regular followers will recognise, and appreciate. In our case you may call it the ‘personalised signature’ of Angela Martin.

As I have said many times before every wine is different, not just within our denomination, but in every wine region of the world. For example, I have mentioned that our 2010 wine will not be ready for release for several months, whereas, at the other extreme, some other bodegas are already about to start bottling their new vintage. Hence the title of today’s blog – some albariños will actually be beating Beaujolais into the nouveau market of 2010!