Roofless, but not toothless…. 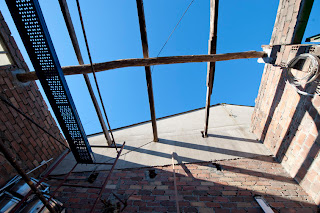 I was going to try to attract some additional attention to our blog by putting in a title such as ‘Castro Martin goes topless’, but then I discovered that I had already used it (a couple of years ago when we had our tanks repaired, and the workmen had to cut all the tops off ). Believe it or not, it does, temporarily at least, increase the traffic to our site as web surfers use their search engines to look for more interesting pictures. Imagine their disappointment when all they get is a wide angle shot of one of our old storage sheds with no roof!

Now, speaking of old sheds (or perhaps I should call it an out-building) the one that we are currently re-building looks like it could easily date from biblical times. It is in such a poor state of repair, which is why we decided to work on it before it fell down. Joking apart, the roof beams (made from bare tree trunks), have been supported by jacks for some time now, and although the building is only used for storage, it had actually become a little dangerous. It is doubtful that it would have survived another stormy Galician winter.

As you will see from the photo, we decided to take advantage of the continued good weather, by ripping the old roof off before some new concrete beams are delivered later this week. Once the roof is back on, we can then make the interior a bit more presentable by slapping a bit of plaster on the inside walls. Of course, this old building is tucked away at the back of the bodega, and will never receive visitors, but even so, it will give us an excuse to keep the place a bit more tidy in the future…..