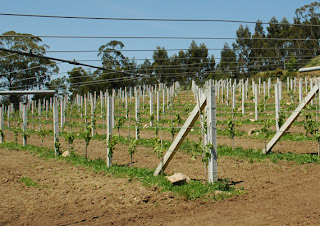 New plantings are springing up around the world

Having said a couple of days ago that Albariño is in decline, the press are now dramatically declaring that it is “on the brinkof International Stardom”!

It would seem that plantings have been made in a couple of new areas, in different countries, which whilst being quite exciting, hardly constitutes an explosion of new plantings as implied in the article.

We already know that albariño is being grown in California, Oregon and Australia to name but a few, but it is now apparently taking root in Corbières and the Languedoc of south-west France. In Corbières these new plantings will not produce until around 2015, and the growers in question have suggested that their new wine could possibly be blended with other varietals such as viognier, grenache gris and grenache blanc. Hmmm, very interesting.

Perhaps another, even more interesting new area is to be found in the Lebanon – not the Bekaa Valley, but in a different area, unfortunately not specified in the article.

To be honest I do not consider this as competition to albariño from Rias Baixas, mainly owing to the fact that the different soils and climates will inevitably give these new wines their own distinctive character. On the contrary, I will actually be very keen to taste some of these new examples when they eventually come to market.

Finally, the article included one very interesting comment that I would like to quote as follows: “We are seeing a trend with consumers at the moment towards lighter, fresh and aromatic styles – albariño clearly fits this profile”.