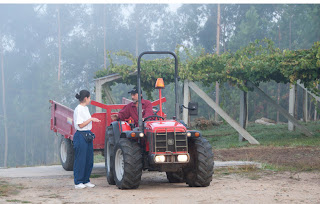 One of the first grape suppliers to collect cases on day one
When I opened the shutters at home this morning I doubt if I could see more than 100 metres as a heavy sea fog rolled in from the Atlantic, but by the time I had shaved and showered the sun was already beginning to penetrate. By around 10.30am the sun had done its job, and was now dominating the sky over Galicia.
By mid-afternoon the first grapes arrived and the temperature had risen considerably, both inside and outside the bodega – the first signs of stress…. Despite our the careful plans and preparation we always find some small detail left undone. This year, for example, we have altered the concentration of sulphur that we add to the unfermented grape must, and the exact amount that we use is calculated automatically by a computer spreadsheet. As the first grapes entered the press we were still re-calibrating the whole sheet, and finished just in the nick of time. So much for being prepared!

As the first grape must emerged from the press, we were obviously anxious to taste the juice, and we were not disappointed. Fresh, clean, zesty, and as always, an intense, piercing fruit, everything we have come to expect from our vineyards. Of course the first real tasting of our finished product is still some months away.

We ended the first day on a high by creating a new record in the bodega – receiving more than 6,000 kilos on one truck from one single vineyard – as you can guess, it was a pretty big truck, full of really good quality fruit. A good first day all ’round.