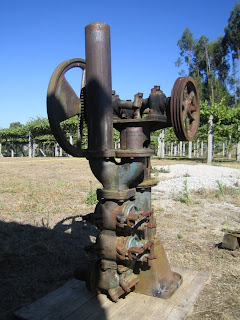 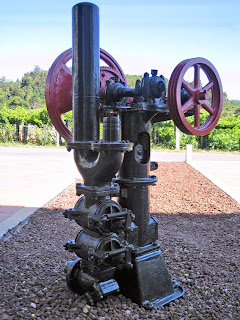 Without too much to do except wait for the grapes to ripen in the vineyards we decided to have a clear out in one of the buildings at the back of the Bodega.
Hidden in a corner we discovered an old pump, which had probably been earmarked for the scrapyard – but we have since decided to give it a new lease of life….

At the front of the bodega we used to have a couple of old barrels, intended purely as a bit of decoration. Unfortunately, the ravages of the Galician weather have taken their toll on the wood, and eventually they simply started to fall apart. It was my original intention just to prepare a couple of replacements, but then we came across this old engine which seemed like a much more attractive and permanent solution.

A couple of coats of paint later it has now been installed in its new home immediately adjacent to our front door, not exactly restored to its former glory, but looking rather resplendent nonetheless.

I have to confess that as the front area of our bodega is open to the road, we have taken the precaution of bolting and welding this new addition to a rather large piece of concrete!