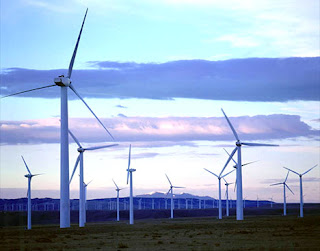 Did you know that Spain, along with Germany and Denmark, is one of the top wind power producers in the European Union? It is now claimed that up to 40% of the country’s total demand is supplied by wind turbines, and as you might imagine, many of them are situated here in Galicia. Many of the rolling hills in the north of our province are dotted with some fairly impressive wind farms (or perhaps ugly wind farms, depending on your point of view). Which ever way you decide to look at them, it is a very green, and sustainable way to produce electricity. Even so, the Spanish Government is not resting on it’s laurels – it is aiming to triple the amount of energy it derives from renewable sources by 2020. Certainly an ambitious target.

I write about this now simply because, for the last week or so, we have endured some fairly persistent, strong winds in our area (ideal for the turbines I would guess). I am not sure about the actual wind speeds, but suffice top say that we certainly had to hang on to our glasses and cutlery during an attempted barbeque lunch yesterday!

You may gather from this story that, despite the strong winds, temperatures have remained high, at around 30°C (86°F), but having said that, there is still something fairly odd happening….. these are warm winds blowing from the north.

I did check on a couple of weather websites before I made this post, just to make sure that it was not just my imagination, but indeed, it would appear that the winds are coming down from the south of Ireland, and across the Bay of Biscay. To date I have no explanation as to why they should be so warm.