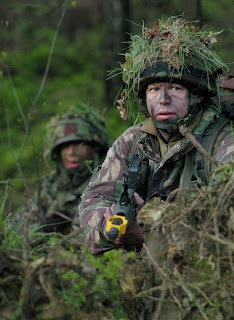 My original idea of an ambush 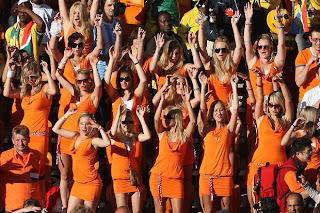 The modern interpretation of an ambush (with much nicer uniforms)

One of the latest scandals to hit the current World Cup competition arrived in the shape of 36 young girls dressed in bright orange mini-dresses, mingling with Dutch supporters. Their dark secret was that they were actually ‘placed’ there as part of a marketing stunt and were advertising a beer, but unfortnately not the official beer of the tournament – hence the problem.

They were promoting that well known Dutch beer ‘Bavaria’, named after one of Holland’s lesser known ski resorts! (Like you, I would have assumed that this was a German brand). Strangely, from the pictures I have seen, their dresses carried no branding, so how they were actually identified perhaps only Sepp Blatter will be able to explain.

Anyway, having forked out millions of dollars, the marketing people at Budweiser were more than a little upset about this unauthorised advertising attempt, and consequently this group of rather attractive ‘supporters’ were ejected from the stadium.

Apparently this ‘ambush marketing’ as it is known, is being used with increasing frequency, whereby one company will gatecrash a large event in order to promote their product without the usual financial outlay. If only I had known this before I could have gatecrashed a couple of local fiestas myself, brandishing a bottle of Castro Martin Albariño!

It  also makes me wonder – didn’t the real ambush start when the this Dutch beer was named Bavaria?