The woes of being English 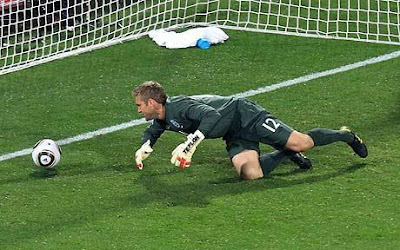 I have been trying hard not to mention football too much (especially after the season that my beloved Liverpool FC have had), but now my heartache and despair is prolonged by the pain of watching my national team perform in the 2010 World Cup.

Our problem appears to be that we over-rate ourselves. Yes, true, we have a great Premier League, with some of the best club sides in the world, but at national level, well, that’s quite a different story…..

On paper at least, we should do well, and if the competition was decided by how much our players earn, then we would certainly be the world champions. The problem is that for some reason when our players pull on an England shirt they perform like a bunch of Sunday League pub footballers. Well, OK, that might appear to be a bit of an exaggeration, but then did you see the goal that the USA scored against us on Saturday?

In recent years this is the third embarrassing goalkeeping gaff that we have been made to endure in serious competition. The first, a keepers ‘fresh-air kick’ in Croatia, allowing the ball to roll over his foot into his own net. The next, another ‘Teflon® Glove’ incident at Wembley, very similar to last night’s debacle. And now this third error in Rustenberg, which may well go down in history for all the wrong reasons. (Neutrals please note that all three blunders were made by three different England ‘International’ goalkeepers)!

Oh, the joys of being an England supporter…..