Fiesta on a budget 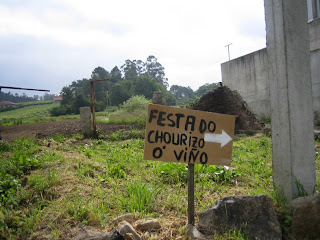 I have written a few times recently about hard times that have befallen the Spanish government – it would appear that these may now have filtered down to grass roots level….
A few weeks ago I mentioned the fiesta of kiwi fruit held in Galicia – highly organised, with an action packed agenda of imaginative kiwi activities spread across the weekend. Printed colour brochures, banners across the streets – top publicity and marketing.
By way of contrast, a local village not a million miles from here, held it’s own fiesta of chorizo and wine last weekend (albeit their spelling is a little different in Galician). As you can see from my photo, it could well be that their budget had been reduced – or perhaps it was simply just a much more humble affair.

Yesterday we had the tinto wine festival in Barrantes – apparently a good time was had by all, despite the local red wine, which I personally don’t really care for.

As you may have gathered I did not actually attend as I was on airport duty, delivering some friends to the tiny airfield at La Coruña International. This idea of airport grandiosity reminds me of arriving at Luton Airport many years ago, when looking out of the aircraft window a huge airport sign boldly declared “Welcome to LA” – after all Luton is so similar to Los Angeles!