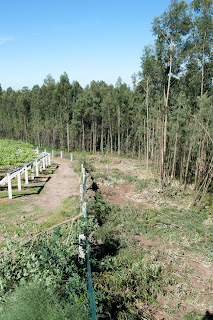 You may recall that back in January, following a storm, a large Eucalyptus tree was felled, and unfortunately landed in our Bodega vineyard. At the time our neighbour promised that she would move the tree line further away from our fence, and I now happy to tell you that this work has just been completed. Indeed, it was completed much, much quicker than I imagined.

On Thursday morning Angela and I went to talk to the tree fellers (actually there were only two of them – old joke), as they had more or less just started their work. This morning I thought that I would bring my camera to work to capture an action shot of falling trees, and men in hard hats. Not to be – the work had already been completed, so now I just have a photo of a swathe of land without trees, which is not quite as exciting.

The good news is that this means that the vines in the lower section of the vineyard should now enjoy much better exposure to the sun, and also may have slightly less competition when it comes to finding water in the soil. We shall see.

Of course, the Eucalyptus tree is not a native of Galicia, but I think was planted extensively in the early 1980’s to supply wood pulp to the local paper industry. On the plus side (for the paper people at least) it is a fast growing species, whilst on the down side it’s dense plantations are prone to catch fire and burn very easily – our region has suffered from some fairly horrific forest fires as a result.