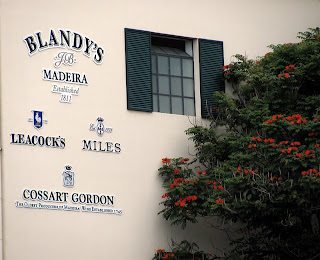 I read somewhere quite recently, that the sales of Madeira have increased by up to 20% in the last 12 months and that it was making a come back….. for me at least, it has really never been away.

OK, so I have to confess that I am not really too much of a Madeira drinker, but always have a bottle in my kitchen cupboard that I use much more for cooking purposes than I do for quaffing. I guess that this gives my age away, in that Madeira is a pretty old-fashioned, or should I say, traditional cooking ingredient, which quite curiously is extensively used in the French Repertoire de la Cuisine. Anyway, I highly recommend using a less expensive bottle to splash into a tomato based or brown sauce for meat, whilst the good stuff can be reserved for more serious appreciation.

Madeira wine as we know it today actually evolved over centuries, and was developed by a series of ‘happy accidents’. The story begins with the discovery of the island by João Gonçalves – the wonderfully nicknamed O Zarco “the cross-eyed”, in 1418. It was a regular port of call on the busy shipping routes between Europe, the New World and the East Indies. Originally covered by forest (hence it’s name – Madeira meaning ‘wood’ in Portuguese), it was eventually cleared and planted mostly with sugar cane, but also with wheat and a few vines imported by different European settlers.

As the sugar cane market declined, so the wine became more important, and by the middle of the 16th century it started to be exported to America, Brazil, the West Indies and England. This new Madeira wine became a great favourite in America, and its style was already starting to evolve, probably more by accident than by design. On its long sea journeys around the world the wine would be subjected to very high temperatures and start to oxidise within the wooden casks that were used for shipping. This baked, oxidised wine actually becoming such an acquired taste that it was a firm favourite of General Washington, and was drunk to celebrate his inauguration as President of the United States.

It was during the 18th century that alcohol was used to fortify the wine, but again this was not a planned development. As exports were halted by sea battles around the islands, so the stockpiles of wine grew, and in an attempt to preserve their longevity, so the alcohol was added. Yet again this proved to be a popular augmentation, so much so that Madeira was known as the ‘Isle of wine’.

As with many other wine regions, Madeira was devastated by the arrival of both oidium and phylloxera between 1850 and 1870, but in this case, the industry on the island never really recovered, and this fortified wine never regained its previous level of popularity.