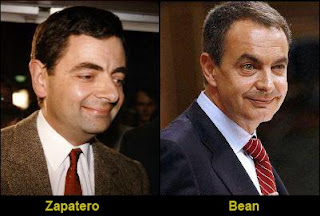 Politics are normally to be avoided in my blog, mostly because they have nothing to do with wine, but with Spain facing economic meltdown (or so we are led to believe), I thought that I should at least give it a mention.

José Luis Rodríguez Zapatero (known as Zeta P. by his supporters, and Mr Bean by others), together with the rest of his government, appear to be in denial, or perhaps have simply been waiting for either EU or IMF intervention to give them the excuse that he they been looking for….. that the drastic budget cuts that they are now forced to make are not actually of their own design, but have been forced upon them by outside agencies.

Following this pressure from overseas, not to mention a call from Obama himself, Sr Z. has recently announced a 15bn Euro austerity plan, but the likelihood is that this will not be enough. The crisis now looming in Spain has two main problems at its epicentre – Banking and Employment.

The country now suffers from more than 20% unemployment, and has a further 20% working as government functionaries. Until very recently new public sector workers were still being employed; positions which are highly sought after simply because they are considered as ‘jobs for life’, carrying generous benefits and pensions etc. Meanwhile, back in the real employment world, Spanish law makes it virtually impossible, or at the very least, cripplingly expensive to lay staff off, which in a recession leaves employers in an impossible situation – the labour market is in desperate need of reform.

Much of this unemployment is down to construction, or rather the lack of it. Spain has been living off the back of generous EU subsidies and an artificial construction boom for the last 20 years or so, when literally thousands of homes were built that were actually not needed – consequently they now stand empty.

Moving away from construction, it is of course the banking industry that really lays at the core of the recession, so in that sense Spain is by no means unique. Perhaps it is just their way of dealing with it that differs from the rest……

In contrast to the apparent success of Santander, it is the local savings banks (Cajas or Caixas) that are now failing, CajaSur being the latest victim. Here in Galicia two local Caixas have announced a merger of sorts. Caixa Galicia and Caixa Nova will merge, but will retain their own Presidents, their own board of directors and two separate head offices…. not much of a merger then! These two Caixas will however, close a few branches, which is hardly surprising – during the boom new branches were still springing up on every street corner in every town and village. For example, I think that the small town of Barrantes must have at least 7 or 8 banks, even more than the number of coffee bars!

So fasten your seatbelts, it looks like we could be in for a bumpy ride.