Alcohol free rosé wine….. in a can! 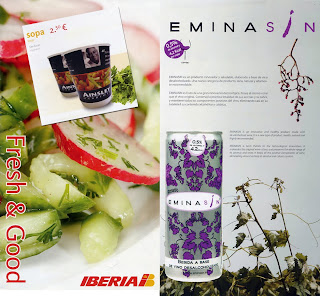 In some perverse way I applaud Iberia Airlines in their attempt to produce a ‘healthy’ menu for short haul passengers – the fact that you have to pay for your menu selection is another story.

I must confess that I haven’t tried it yet, but I did notice that they offer an alcohol free rosé wine in a can. Of all the containers that can be used for packaging wine, bottles (both plastic and glass), tetra briks and wood (if you include very small barrels), I have to confess that I am not so sure about using cans.

As a beer drinker I do notice the difference in taste between particular brands that are sold in both bottles and cans. There is most definitely a taint that appears when the packaging is made from aluminium, so what effect this might this have on a wine? Well, I will simply have to try it and see.

Apart from the ready sliced apple served in a plastic bag, there was one other offering from the new Iberia menu which also quite surprised me. Their healthy soup.

UK television channels are awash with celebrity chefs, cookery programmes and cooking competitions, and as a frustrated chef myself, I confess that I am a great fan of many – they can be great entertainment and you can pick up many new cooking styles and techniques.

There is however, one ‘celebrity’ chef that I simply can’t abide. His name is Ainsley Harriott. Apart from being relatively talentless, there is just something about his manner that gets up my nose – his website describes it as flamboyant, so perhaps that explains why he flails his arms around like a demented octopus when he cooks. I am convinced that one day he will actually shout “Ole” when he completes a dish!

His CV is also not that impressive when compared to most other TV chefs. After reaching the dizzy heights of commis chef, he gave up cooking to persue a music career with the Calypso Twins, before becoming a comedian. To quote him from his own website, he says “I think that it’s an enormous advantage to know how to make delicious beans on toast”, which just about says it all.

Anyway, of all the famous chefs from around the world (including Spain) that Iberia could have picked….. yes, you guessed it – they now include the Ainsley Harriott collection of soups on their menu. I don’t think for one second that the Spanish will have a clue of who he is, but for me at least, his name does not serve as an endorsement for quality food.

By the way, if you think that I am becoming a bit anti-Iberia, then you should see some of the passenger comments on this website!