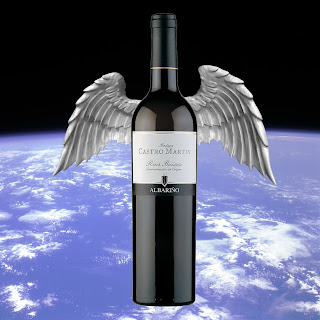 Albariño – gives you wings!
The other day we made an experimental bottling, for the first time using a new, slightly lighter bottle. Believe it or not, this was as the result of a number of requests from customers wanting to reduce their carbon footprint. Of course the idea is that (depending on the configuration) a pallet of wine can now weigh as much as 100kg less than it did before, and subsequently the amount of fuel used to haul it from country to country is reduced in direct proportion.

The secret was to find a bottle that not only looked as good, but also felt like a quality bottle despite the reduction in weight…… we await the reaction of our customers – hence that reason that I classified this as an experimental bottling.

The funny part of the story is that whilst I was explaining this to one of our guys in the bottling line, he jokingly suggested that we should make an Albariño ‘Lite’ to go with the new bottle – but having said that, I believe Albariño can already be classified as a light wine. That’s not to say that it has no flavour or body, but it’s really more a question of the level of alcohol – our wine never really exceeds 12.5% alc. but more usually hovers around the 11.5% – 12.0% level.

For me this has always been one of the great selling points of our wine, the fact that two people can sit down over a meal, and happily share a full bottle without emerging staggering or even remotely hungover. Alternatively it can be enjoyed as an aperitif, sitting in front of the TV watching England win the World Cup (in my dreams)!

P.S. My tip for the Mondiale 2010 is actually Spain….. forever the diplomat.